Pigozzi to teach Writing & Speaking in Business this fall

John Anderson, one of our affiliated faculty, has just been named co-director of the Segal Design Certificate Program, along with Stacy Benjamin. The Design Certificate is available to any Northwestern undergraduate who wants to work on design in a team-based, cross-disciplinary setting. Information on the program can be found at http://segal.northwestern.edu/programs/undergraduate/segal-design-certificate/.

Writing Program faculty remember with joy and sadness our former colleague and friend, Edith Skom, who taught in the Program for over 30 years. Edie was a dedicated teacher and mystery writer who brought wit, compassion, and intelligence to us and to her many students. For more on Edie’s life and accomplishments, see Northwestern News and The Daily Northwestern.

Charles Yarnoff has been appointed to serve on the search committee for the next Director of the Searle Center for Advancing Learning and Teaching at Northwestern.  The Searle Center occupies a key role at Northwestern, offering to students and faculty a wide array of services and programs that promote outstanding teaching and in-depth learning. 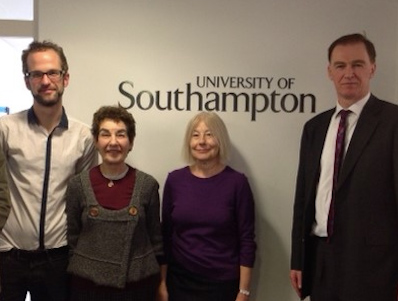 Phyllis Lassner just completed the first of her three year visits to Southampton University, UK, for her International Diamond Jubilee Fellowship. She gave a keynote address to a symposium based on her research, Espionage and Exile, led an MA workshop on “Women and War Writing,” and co-taught a Graduate Seminar in Holocaust Studies on the subject of “Liberation and After.”

Significant Gift Made to the Northwestern Writing Program

The Writing Program of the Weinberg College of Arts and Sciences was renamed the Bobbie and Stanton Cook Family Writing Program on May 13, 2015, after the Cook family made a significant gift to the program that touches every part of Northwestern University. Read more